I know the title is confusing.  However, I chose this title to make a point.

What is the purpose of having one’s nose cosmetically altered if it screams “I had surgery on my nose”?

So what makes a nose look unnatural?  In my opinion, the most common alteration is to shave off too much from the dorsum (the hump) of the nose.  This will result in a “ski-slope” look, which is most obvious on the profile.  The next time you are walking in the street, look at people’s noses.  In nature, noses either have a hump on the nose or are flat.  A “ski-slope” dorsum does not occur naturally. 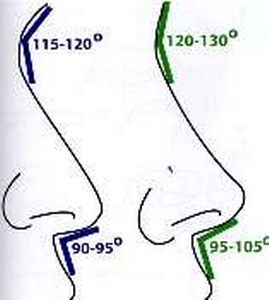 This “style” of nose was, in fact, in vogue in the seventies and early eighties.  However, our goal today is to make the nose look as natural as possible.

The other common problem is inadequate distinction between the dorsum and the tip of the nose.  In females, there should be a slight step-off between the dorsum and the tip.  This is called the supra-tip break.  In males, this break should be very subtle or not exist at all.  One does not want to see the dorsum higher than the tip.  This will result in a “parrot-beak” deformity, which is most visible on the profile.

Visible irregularities of the dorsum are an obvious sign of operation.  Again, if one looks at noses in nature, visible lumps and bumps do not occur.

There are other subtle signs which may point to a rhinoplasty.  However, only a rhinoplasty surgeon can pick those up.  My goal, as an Orange County plastic surgeon, is to aim for a natural looking nose.  I want people to do a “double-take” and guess if the nose was operated on.  It is a challenging goal to meet, but worth the time and effort!

Michael A. Jazayeri, M.D. is a board certified plastic surgeon, with over 10 years of experience.  His office is located in Santa Ana, California.  To schedule a complimentary consultation, please call 714-834-0101.