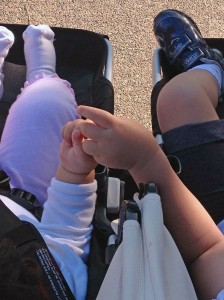 Recently I took them to the park and they were sitting next to each other in the stroller.  Shylee started making noises, which usually signals hunger.  I handed her the bottle and she started to suck on the nipple.  Lena, perhaps not to fall behind, also asked for her bottle, which was given to her.

As they were both drinking from the bottle, I noticed Shylee brought her right hand and placed it on Lena’s left hand.  Lena then grabbed Shylee’s hand and they held hands until we reached home.  This was a beautiful display of lack of sibling rivalry.

As I have watched both of them grow, there is always some competitiveness and jealousy.  However, for the most part, their relationship is mainly symbiotic.  Lena and or Shylee are visibly upset when one or the other are not around and they seem genuinely happy when the other one shows up.

I hope they will end up being each other’s BFF.  After all, who better to rely on than your own “blood”?

Michael A. Jazayeri, M.D. is a board certified plastic surgeon with over 13 years of experience.  His office is located in Orange County, California.  For a complimentary consultation, please call 714-834-0101.