Starting a Colony on Mars Sounds Cool- But Have You Read the Fine Print? 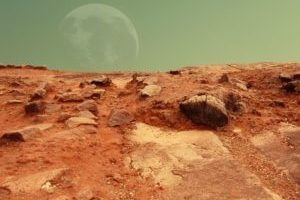 So, everyone is getting excited about traveling to Mars and setting up a colony there. But is it feasible?

The main problem for humans reaching Mars is the constant radiation exposure while travelling in space and living on a planet which has no atmosphere.  The constant exposure will increase the risk of cancer, especially blood borne cancer, significantly. Most likely, all humans who reach Mars will eventually die of cancer, unless we can find a cure.

Well, what if we could reach Mars and terraform Mars to create an atmosphere? That would prevent risk of radiation exposure, right? The fastest estimate for terraforming Mars has been 1000 years.  Most experts think it may take 100,000 years!

There is also concern about changes in the human DNA with space travel.  Rumors have been spreading that Scott Kelly’s (one of the identical twin astronauts who stayed in space for almost one year) DNA has been permanently changed by 7%, compared to his identical twin brother, who remained on earth.  This is inaccurate.  Considering that our DNA is only 2% different from Chimpanzees, a 7% change would have created a completely different creature!  What has happened is that the DNA gene expression of Scott Kelly has changed by 7% and has not returned to baseline after six months of returning to earth. This means certain parts of Scott’s gene which were “sleeping or awake” were turned on and off.  Whether this will have a harmful, or perhaps, a beneficial effect remains to be seen. We should anticipate the same effect for humans travelling to Mars.  Perhaps the gene expression change will be more pronounced, which may have a harmful or beneficial effect. It will take 150-300 days to reach Mars, roughly one year.

In the early stages of the Universe, random pieces of rocks joined to produce our solar system. One piece of rock happened to be the right size and have the right distance form the Sun to allow a habitable environment for life to begin.  In the Earth’s early years, a large comet or piece of rock slammed into Earth.  The offspring of this violent impact was the Moon.  The existence of Moon was critical, because by remaining between the Earth and the Sun, it stabilized the axis of rotation of the Earth.  Without the Moon, the Earth’s rotation would have been erratic, most likely ending any possibility of life formation.  Over millions of years, single celled bacteria started to form on this planet, which was entirely covered by water.  For 2-3 billion years, only single celled bacteria existed.  It simply required too much energy to allow single celled bacteria to merge and form larger biological structures.  At some point, perhaps due to random mutation, the mitochondria were created.  The mitochondria, which was much smaller than a bacterium, was 15 times more energy efficient than the bacteria.  Millions and perhaps billions of bacteria ingested mitochondria as a food source. During one of these random feasts, however, one bacterium ingested the mitochondria…but the mitochondria survived, becoming part of the bacteria. This allowed the bacteria to merge with other bacteria, eventually leading to multi-celled organisms such as humans.

Scientists believe such an event is so rare, we may be the only highly intelligent life form in the entire universe.

It, therefore, makes much more sense to keep our planet Earth livable as long as we can. I wish all of us could realize how lucky we are.

Michael A. Jazayeri, M.D. is a board-certified plastic surgeon practicing in Orange County, California. His office is in Santa Ana. To schedule a complimentary consultation, please call 714-834-0101.