Watching Soccer with My Children 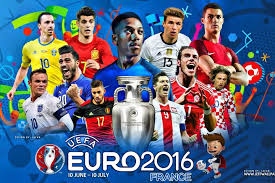 As many of my regular blog readers know, I have 5 year old and soon to be 4 year old girls.  I was planning to watch the final game of the 2016 European soccer championship between Portugal and France.  So I prepared my daughters in advance by telling them how we let them watch television, and now it is daddy’s turn to watch some TV.

“Can we watch it with you?”

I explained the game to them in very simple terms, and repeated it a few times before the game started.

This is a short synopsis of what happened for the next 30 minutes.  Mind you, these questions were asked every 10-15 seconds, and they took turns!

“The game just started.  No one has won.  Whoever scores the most goals wins.”

“How come that guy has a different colored shirt than the other players?”

“He is the goalie.  He wants to prevent the ball from going into the goal.”

“How come that guy is wearing yellow shirt?”

“He is the referee.  He makes sure everyone play the game correctly and follow the rules.”

“How come that guy can touch the ball with his hands?”

“The goalie is the only player that can do that.  Remember, he can use his hands and block the ball from going into the goal.”

“How come the guy with the red shirt touched the ball?”

“When the ball is out of the playing area, it is called being out, and the other players can throw the ball back in using their hands.”

Fortunately, after 30 minutes, they started playing with their Lego sets.  Unfortunately, by then I had ended up in the Psychiatric hospital and missed the rest of the game!

Michael A. Jazayeri, M.D. is a board certified plastic surgeon, with over 16 years of experience.  His office is located in Orange County, California.  To schedule a complimentary consultation, please call 714-834-0101.